Although there is no one single best Kawasaki Mule snow plow setup, there are snow plows and plow kits that are better than others for particular situations. The first thing you should ask yourself when shipping for a UTV snow plow is how much you want to spend. But in addition to price, the functionality of a plow is also worth considering. If you’re getting a plow for commercial use, you’ll likely want something with a little more versatility. Alternatively, if you’re getting a plow for personal use, it’s possible that you’ll only need a few basic features that fit your specific needs.

KFI snow plow systems for the Kawasaki Mule are arguably the best bang for the buck that riders can get. These winch-driven plow kits come with push tubes, plow blades, and vehicle-specific mounts, and they can be lifted and lowered with anything from a 4,500 Lb KFI Stealth winch to a 2,500 Aprove winch depending on your needs. Even with hydraulics to pivot the plow blade left and right on the horizontal axis, KFI’s Kawasaki Mule snow plow kit is still cheaper than most of the other options out there. Plus, you can use the KFI plow system to run both steel blades as well as PolyPro blades in any size ranging from 60” and 66” blades all the way up to 72” blades. Whether you’ve got a Mule Pro FX LE, a Mule Pro MX, or a Mule SX XC, the build quality and fitment of KFI plows are guaranteed to satisfy the most scrupulous of snow movers!

You can elevate the bottom of a KFI plow blade to be positioned slightly above the ground so that it doesn't dig up your gravel driveway or lawn, and a KFI plow is perfect for pushing slush and nuisance snow that blowers leave behind. Furthermore, the KFI plow can be used to both pry up ice as well as pile up powder, making it a great choice for almost any application!

The mounting plate for KFI snow plows bolts to the front bumper skid plate and the frame underneath the a-arms. Because the plow mount attaches via U-bolts around the underside of the frame, the only drilling you have to do during installation are two holes in the front plastic skid plate threw which the U-bolts pass.

The Kawasaki Mule snow plow kits by Warn are decent, but they’re more expensive than KFI plows and have a few annoying flaws. One such flaw is the location of the winch controls inside the cab. Many riders end up using Zip-Ties to secure the remote to their parking brake so that it's easier to access. Another engineering oversight of the Warn snow plow kit is that the mounting plate blocks the front differential, making routine maintenance a real pain.

As long as you get the pulley piece with it, the 72"  Moose snow plow kit is great! Although you have to adjust it manually, it can be set to five different angles. This can be cumbersome at times, but if you plow in a way such that you only need to switch the plow angle once or twice, a plow with hydraulics may not be worth it. Without the pulley, the Moose plow can only get up to about a foot above the ground, and the blade is fast and jerky when you lift / lower it. With the pulley system installed, the blade can reach heights of a around 30” above the ground, and the up-and-down movement is be much more smooth and fluid.

If money isn’t an issue, Boss snow plows, Western snow plows, and Snowex snow plows for the Kawasaki Mule are fully hydraulic options that offer something that winch-driven plows do not: down pressure. You typically only use down pressure when back dragging, but it’s also useful when scraping ice and frozen / hardpack snow.

Snowex plows, Western plows, and Fisher plows are pretty much identical, but most plows that use hydraulics to lift and lower the blade will be much heavier than winch-driven plows, so upgraded shocks, heavy duty springs, and some sand bags in the bed to act as a counter weight are all advised. 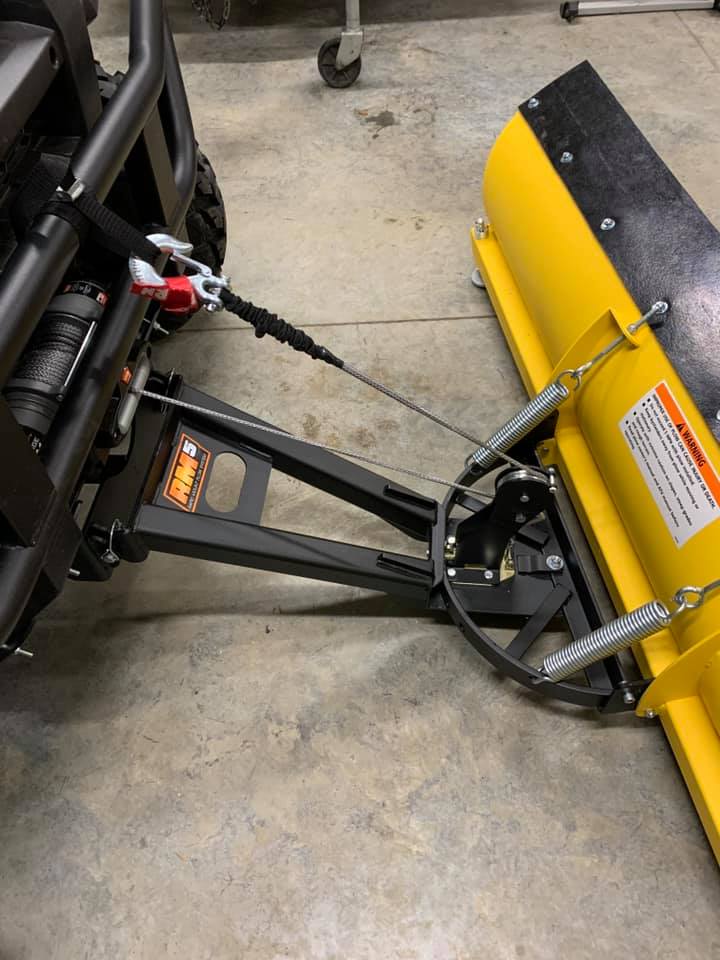 Contrary to what most people think, poly blades are actually heavier (around 2x heavier) than steel blades due to the amount of steel used to reinforce them. Snow does not stick to poly blades like it does to steel blades, but many users prefer steel blades over poly blades because they are more durable, they last longer when used to scrape gravel or push things that a poly blade would not withstand, and you get less suspension drop with a lighter steel blade. At the end of the day, it all depends on how and what you use your plow for (i.e blacktop, dirt roads, sidewalks, etc.). 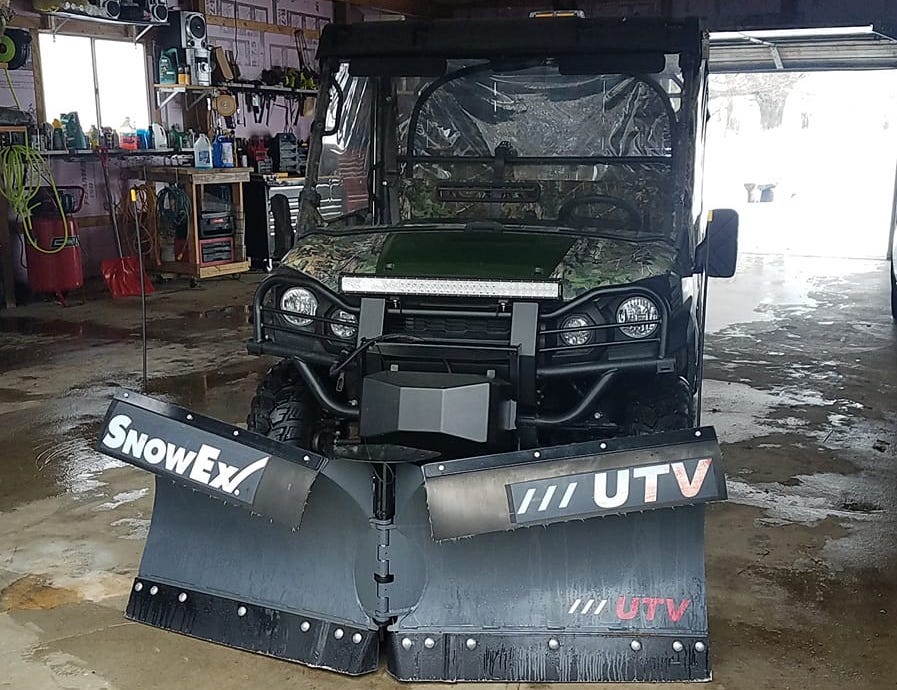 For most riders, a straight plow blade is sufficient. Not only are they easy to operate and less expensive, but they typically last longer as well. V-shaped blades, on the other hand, are better at cutting through deep snow piles, dense snow banks, and stubborn snow / ice that has frozen over. Tapered plow blades are another option. They can push a bit more snow than standard straight blades before the powder starts to flow over the top, but similar results can be achieved by adding rubber deflector flaps or side shields to a standard straight blade. 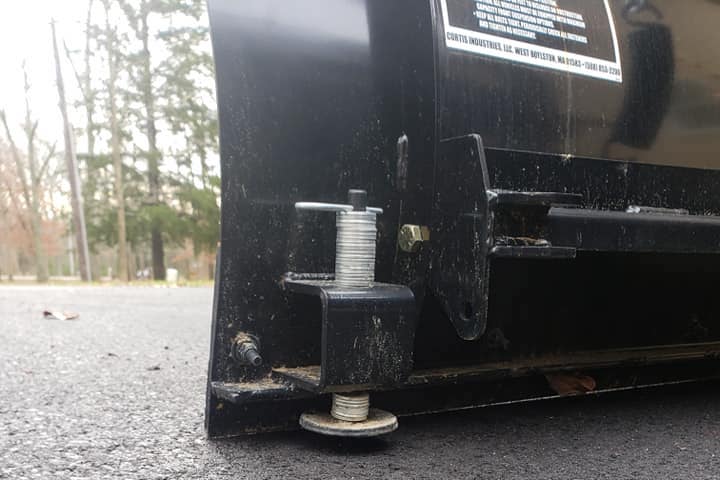 You don’t need to spend $3K to get a quality Kawasaki Mule snow plow, nor must you modify your buggy in order to run a snow plow. Things like snow plow straps can be used to prevent your winch line from rubbing against the fairlead when plowing, while products such as blade markers are helpful when plowing in deep snow. You might find that a power angle adjuster makes life easier for you when plowing, but such luxuries are hardly compulsory. For extremely large jobs, you might be better off with a large truck-mounted plow. But for small- to medium-size areas that require agility, nimbleness, and speed, a Kawasaki Mule snow plow is the perfect tool for the job!